I photographed one of the at least three marches going on downtown last night, which began at Foley Square and ended up underneath the FDR before heading up 1st Ave to Times Square. I witnessed the shut down of the Holland Tunnel, Canal Street, Broadway, both directions of the West Side Highway, W 14th Street, Union Square, Park Ave South, E 23rd Street and the underpass at the FDR. It takes a lot of people to do that, and there were several other coinciding events in different parts of NYC. 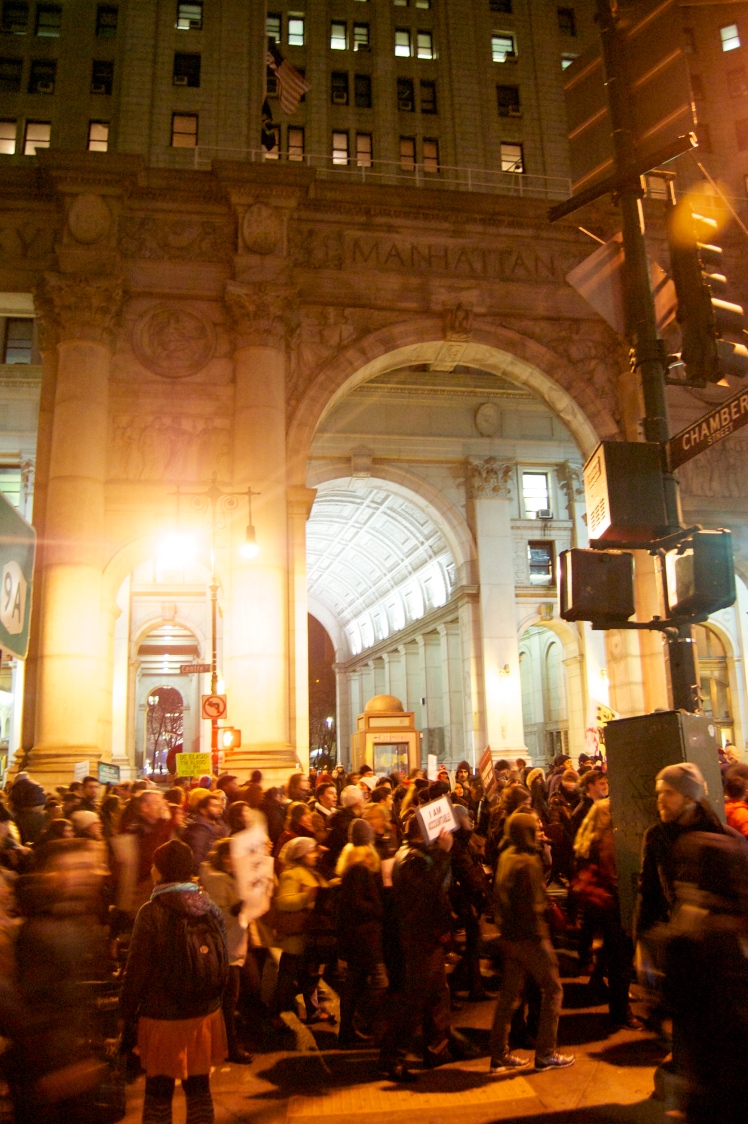 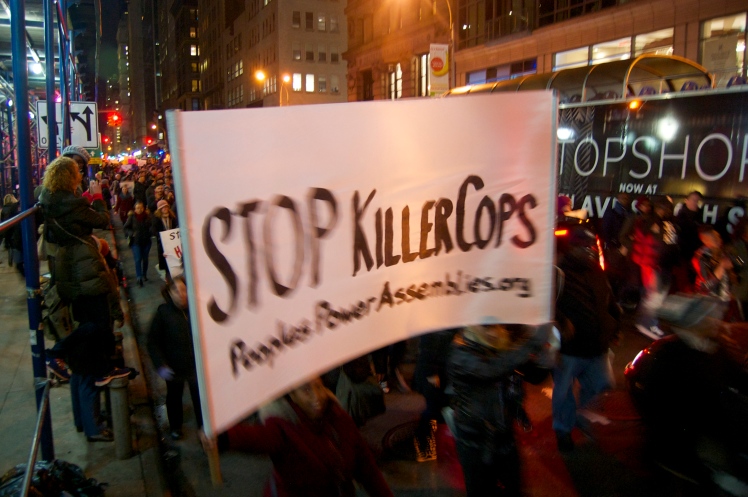 It was a larger, louder and justifiably more angry march than anything I saw during the Occupy Wall Street protests in 2012, which I believe would be the last time Manhattan saw protests on this scale. Many cars stuck in traffic honked their horns in time with the protest chants. 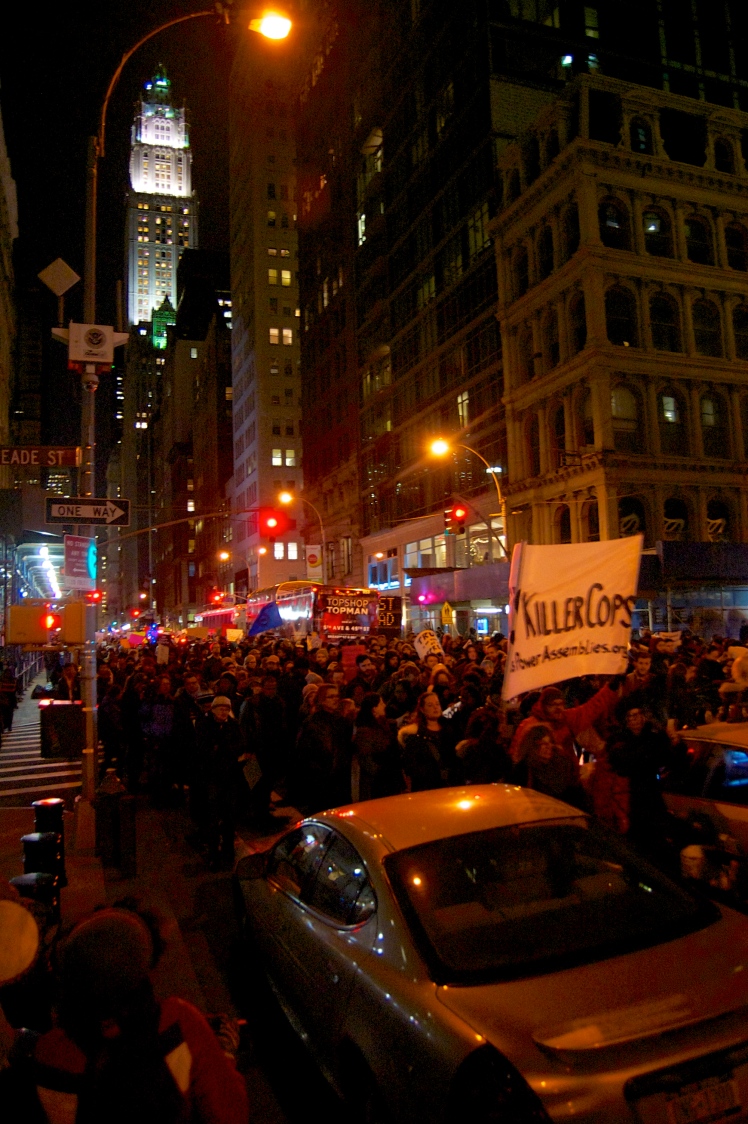 Confrontations with the police were constant. I saw several protesters arrested underneath the FDR and was almost arrested myself while taking pictures. Unlike at the 2012 marches, the NYPD were the faces that represented the very real injustice that happened three days ago. That feeling manifested itself in protesters disrupting or blocking NYPD cruisers with signs and their bodies, occasionally spitting on their hoods or tires. I did not, however, witness any destruction of property or obstruction of justice from the protesters. It began, and remained while I was there, as a peaceful march. 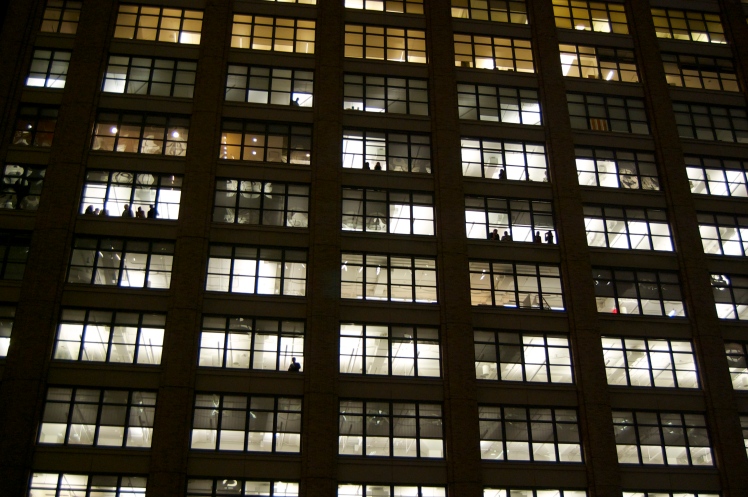 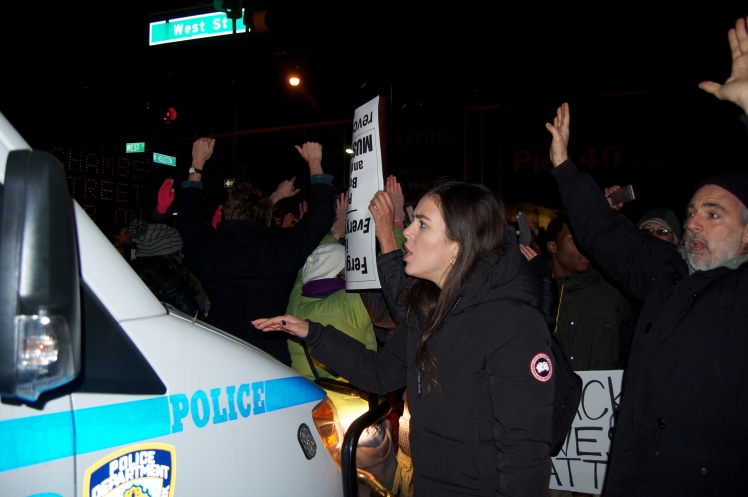 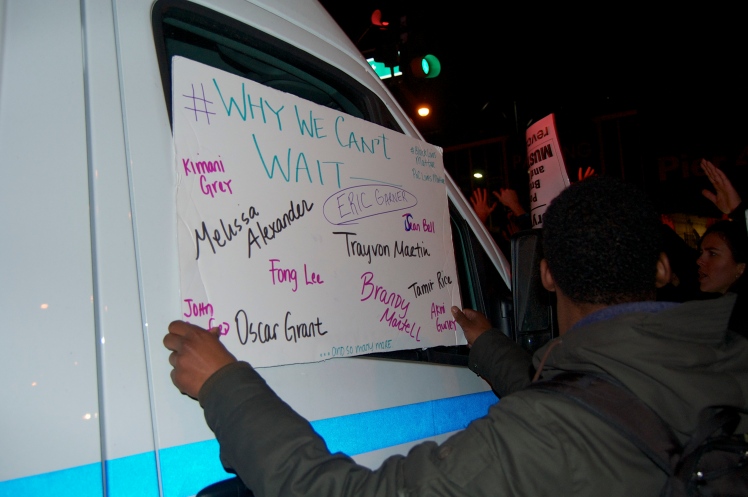 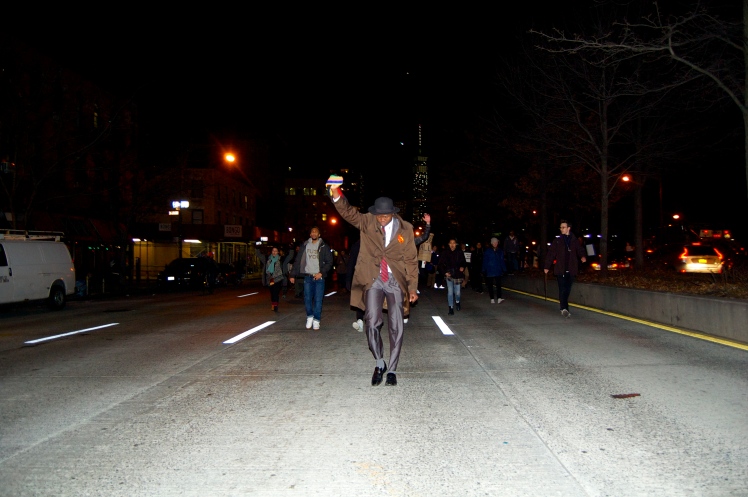 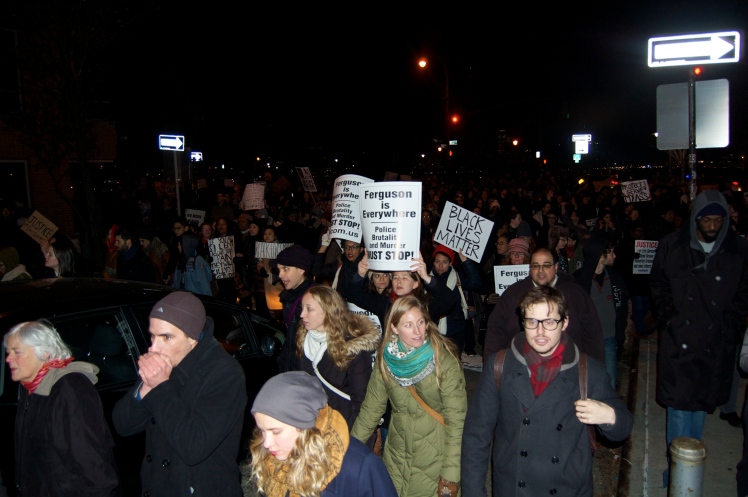 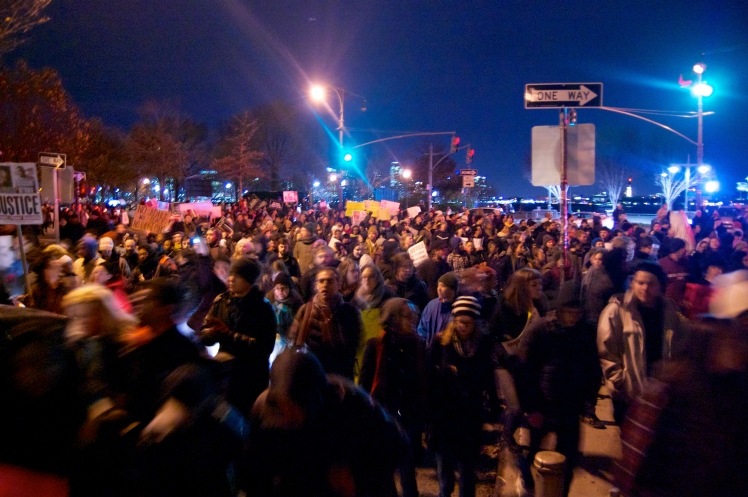 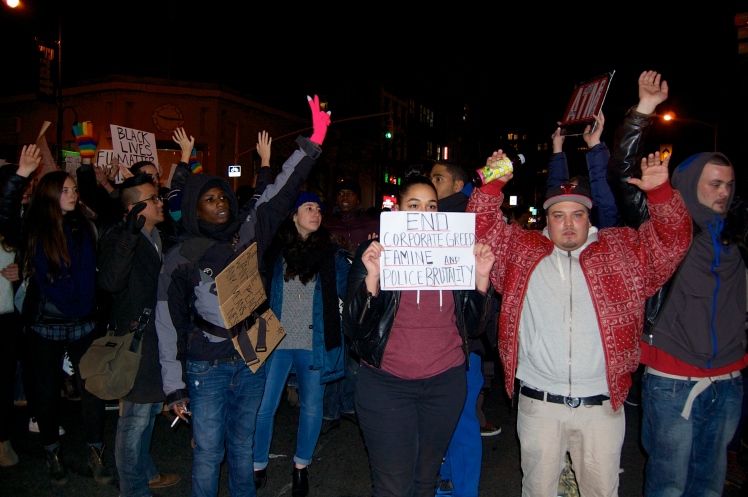 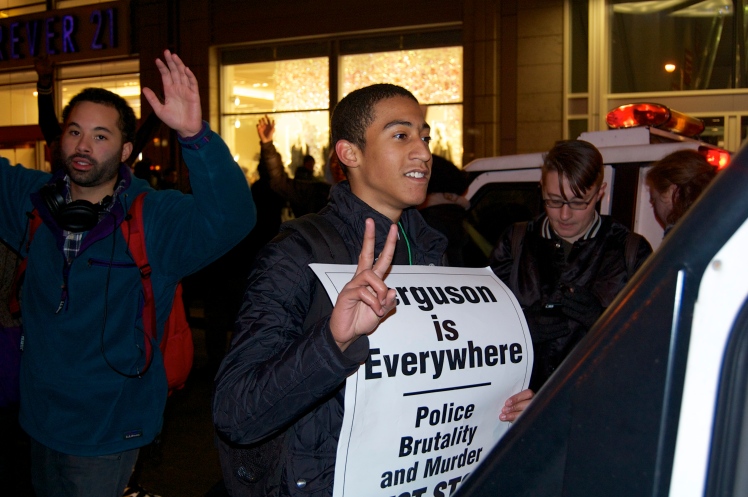 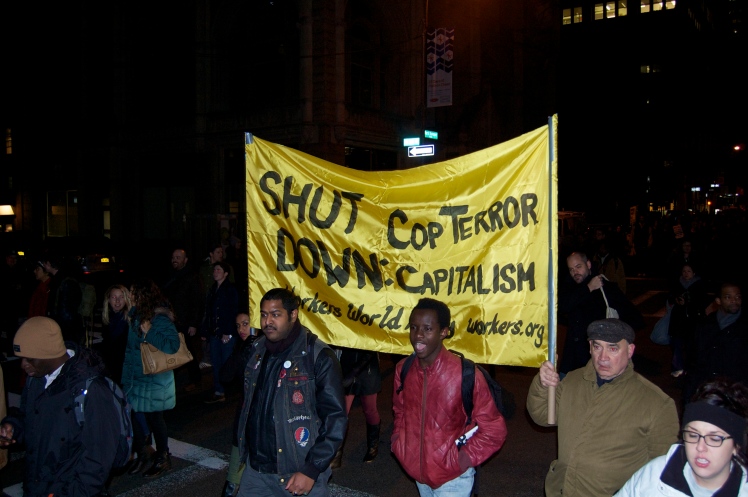 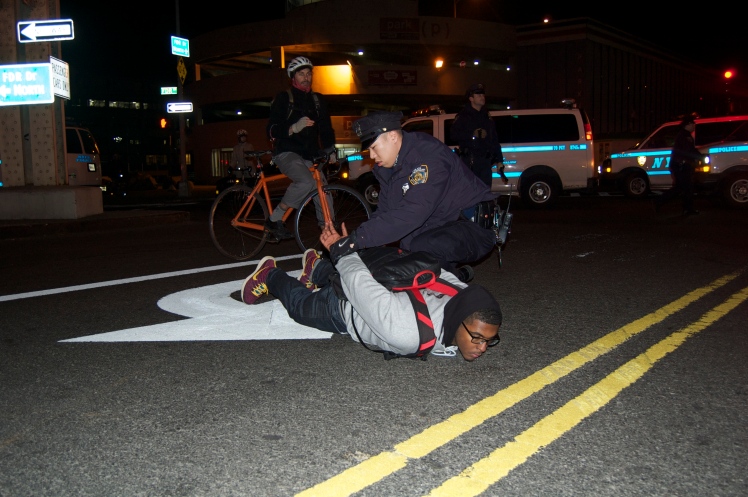 The protests lasted well into the morning and could be going on in Manhattan as I write this. It is absolutely clear, as it was in 2012, that the NYPD know how to corral protesters to lessen their impact, at least on traffic. They do so with forceful arrests and a liberal use of pepper spray, but the greatest weapon they possess in these circumstances is the universal knowledge that the NYPD kill people without repercussion. Nothing is more frightening to an unarmed crowd than the boys in blue in a line with their hands in their pockets. It was made clear last night that this is a serious problem.