So, true to my word, I finally stumbled in to the theatres to see the new James Bond film, SPECTRE. With all of its sensuously glorious pans of semi-exotic locales by Sam Mendes (can any locale be exotic in the internet age?), mixed in with the bludgeoning of entire herds of dead horses and the straining of every vague suggestion of a saucy quip, this movie has left me clawing at metaphorical support beams that might save me from drowning in the pool of nuclear waste that the 21st century James Bond now resides in.

After that damning opener, I should explain that I am indeed one of those admirers of Craig’s high-rated and generally beloved debut. I also start most conversations about espionage (be it regarding film or Edward Snowden) with the blanket statement: From Russia With Love Is The Perfect Movie. Sometimes when I’m feeling sexy for Halloween, I dress in a blue suit with a ruffled blouse and I still break up fights by saying, in a heavy Russian accent, “oh stop it both of you, you are like boys with toys.”

In shorty, I am a Bond elitist, so when I went in to see SPECTRE I was basically hoping for anything that wasn’t Octopussy, You Only Live Twice or Skyfall. I wanted something smart and to the point: a single mission involving old spy tropes while still feeling relevant.

And that has proven not a difficult thing to do for the James Bond films over fifty years of evolving geo-politics, social tastes and a number of actors. Even when we get a slew of total throwaways, like Quantum or the reboot-calling Die Another Day, there has always been a place for some elitist, misogynistic, alcoholic killer in a bowtie to step in and be our hero- even if the only real heroism is playing out a story that has a comprehensible plot and character arcs that involve meaningful interaction. Unfortunately, SPECTRE is not one of these films.

SPOILERS (but not many, and really, if you haven’t seen it by now, why bother?)

There is little doubt that Sam Mendes is an excellent creator of visual stimuli in his movies, and SPECTRE is no exception. The opening tracking shot of Bond stalking his prey while in arm with some gorgeous know-nothing down a Mexico City street as the literal personification of death is both beautiful and leads to immediate tension building- it is simple visual story telling seeped with imagery and brusque pacing.

Other scenes set this film above even Skyfall in terms of prettiness- such as the moment James saves Monica Belluci’s character from assassination (who, despite the big deal about her being the first Bond girl the same age as Bond, is in less than ten of the 148 minute film and feels utterly pointless). There are also panoramic shots of the Austrian Alps, Rome’s cityscapes and a sensuously dusted shot of a classic Rolls Royce emerging from a desert horizon.

One scene demonstrates a bit more meaning for the Bond oeuvre; such as the initial nighttime car chase where Dave Bautista’s Mr. Hinx chases Bond down Rome’s empty corridors. It is a delicious scene involving the new decked out (although not fully loaded) DB-5 and some other sleek sports car, which both drivers have to deftly maneuver down narrow alleyways at high speeds, which can only be maintained by not causing corpulent and homicidal explosions. It ends with an understated crash and Mr. Bond walking briskly away after successfully using his ejector seat. 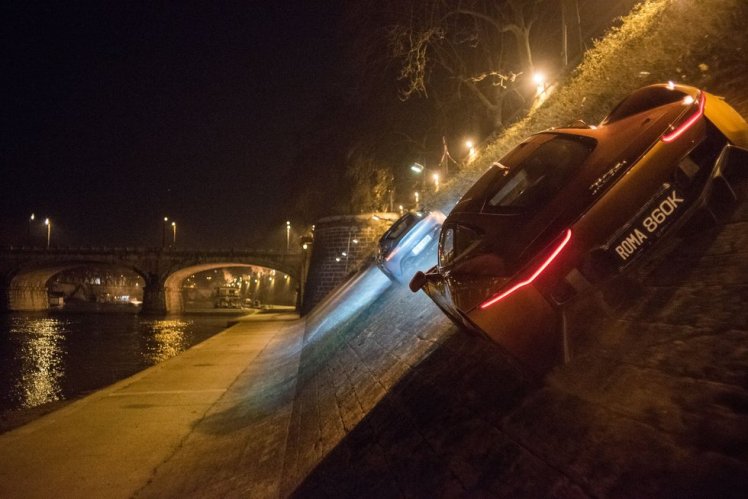 It is a moment of restraint that is noticeably the anti-Bourne chase scene, a franchise whose shadow this Bond has been struggling to crawl out from under since Casino Royale. It is playful and sexy, and the comedic image of the 270 lb Bautista grimacing at his target from a car that can barely lift him reminds us why James Bond flicks keep selling tickets- they are a unique kind of not-too-serious-yet-lethal fun.

Another theme makes this movie different from Skyfall is that it is constantly reminding Bond (and the audience) that his sort of tactics have no place in the 21st century, that he is a “prehistoric misogynistic dinosaur” that ought to be snuffed out as quickly as possible so we can all move on. What you would think would happen is that Bond will reconsider his approach of “I (or, more accurately, my highly-functional white British penis) am the ultimate solution to everything under the sun,” but no, he continues to stumble on through the age of technology with guns, alcohol and big explosions.

In a very self-conscious and odd manner, SPECTRE insists that it is both above the character while simultaneously praising that character’s irrelevance.

Even though he is contracted for a fifth film, there is little reason to suspect that Craig will be returning for another Bond role based on his recent interviews about SPECTRE. This is probably good for everybody- especially Craig, who is too good an actor to be weighed down by this franchise (I would love to see him in another Munich or Defiance)

The reason it is good for both the viewers and, more importantly, the creators of the next series of Bond flicks, is that it will let everybody out from the weight of the “saga” that Craig’s version of bond was both crammed into and overstretched by.

The biggest problem of Sam Mendes’ Bond is that he is forced to morph in accordance to a greater story arc while his main character (which is the only reason why we watch these movies) remains the same. One reason why Casino Royale is so revered as a Bond film is because it exists entirely on its own, with no ties to previous plots or villains. Casino Royale, like From Russia With Love, revolves around a single mission that a secret agent must solve using his particular set of skills. In this regard, Taken in a better Bond movie than SPECTRE (another franchise that also fell prey to overwrought saga-ing).

Hopefully with a new actor playing James Bond that writers will get a chance to return to the basics and punch out another straightforward glitzy thriller with babes, booze and Bond all meshing together in a digestible plot.

You know what would be totally awesome? If between SPECTRE and Craig’s fifth entry, the studio put out another Bond flick starring a different actor a la On Her Majesty’s Secret Service. It could feature another agent who is not yet a 00 on a mission to prove his worthiness. It could literally be a remake of the Lazenby entry and end with Ralph Fiennes given his congrats and promoting him to… the title of 007, codename James Bond, because, as is revealed during the promotion, Craig’s Bond has been killed. Then Craig’s fifth and final movie would be all about how he was killed off by the villain whose sole purpose in life was to make Craig’s Bond sad.

And you know what? Idris Elba would be perfect for that movie.