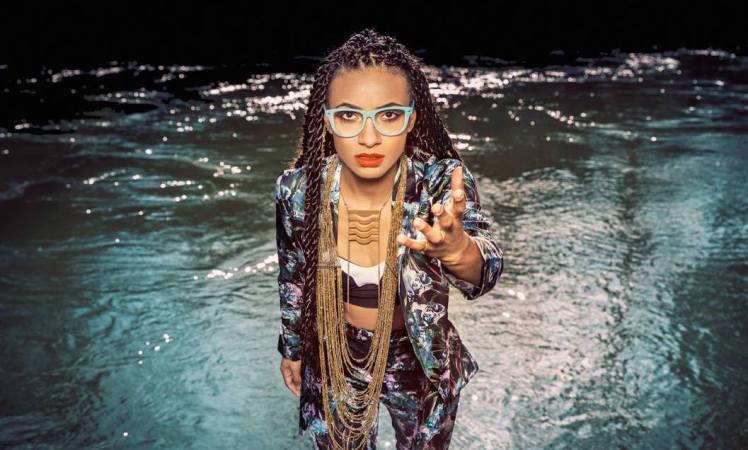 We are all entertainer/pundits with social responsibility now, Portland’s Jazz Prodigy is no exception.

“It’s Esmerelda Spudding”, says Esperanza Spalding to the snappily dressed nonagenarian shuffling forward for a picture with Portland’s biggest name in Jazz since Pink Martini. It seems likely that the two-time Grammy winner knew that her joke would go over the man’s head, just as it seems unlikely that the man who spent $1,250 to attend the Portland Art Museum’s 125th birthday had heard of the artist before tonight, but here we are.

Raised in a multi-ethnic home in King, Northeast Portland at a time when the neighborhood was struggling high crime and poverty, Spalding seems out of place in this crowd of the West Hills elite. Presented to a sea of starchy shirts and stiff ball gowns, her singing voice bubbles and flows through a never waning, wry smile.

Long seen as a virtuoso in America’s Jazz community, Spalding alternates between an upright and a 5-string electric bass. Her affinity for the rhythm section gives her signature hits “Black Gold” and “I Know You Know” a bouncy, soulful vibe that spitfires echoes of the most danceable beats of Rufus, Sly and The Family Stone and their funky ilk. Complementing a Jazz sound that is distinctly in-the-now are lyrics that detail scenes, figures, and entire communities in the style of a Lou Reed or Outkast.

But to say that Spalding, who once played a Depression-era classic in front of the Obamas at the White House, is simply a folk artist would understate the power of her storytelling.

When Spalding evokes African heritage through lines like “think of all the strength you have in you/from the blood you carry within you/ancient men, powerful men/built us a civilization”, she rips through one of the cultural barriers that finally seemed to come down in the Obama years. White Americans didn’t invent democracy, and they don’t hold a monopoly on the historic moments of human achievement.

Considering how she approaches Jazz- experimenting with the sounds of Bossa Nova, Funk, Hip-Hop and more- it makes sense that when Esperanza Spalding engages with something as political as immigration in the United States, she would do so with absolute openness.

In September, Spalding and her band played four original songs that she was inspired to write after encountering four women behind Bienestar, a low-income housing non-profit that provides for communities in Hillsboro. Many of Bienestar’s residents are Latino immigrants, something Spalding addressed when explaining four large photographs of the women behind her onstage. While it may have been a coincidence, it was difficult to avoid drawing comparisons between this song and Four Women by jazz great Nina Simone. However, while Simone’s lyrics about four black archetypes is burning with fury, resentment, and an unspoken demand for justice, Spalding’s song is sweet, with characteristic technical brilliance- and does not point any fingers.

What inspired you to write the songs you played for us tonight?

This particular batch of music here is so specific. I wanted to write four songs about these four women who are phenomenal artists- they are life artists. They take these tools that aren’t necessarily the sharpest and not necessarily the best, and they start with a thinly strung canvass, and they produced these masterpieces of thriving.

I had a little piece of paper about each of them- an English translation of an interview about their life. So with each one I was looking for aspects that I could extract from their story that would weave a song about a bigger idea that they are connected to, or that I saw in their story.

What do you mean by “life artist”?

I mean they are composing, play by play. They get up everyday and they look at a blank canvass, and they have to create.

Individuals who are working with less resources have to be far more creative, and if creativity applied makes someone an artist, to me those women are exceptional artists because what I know about their story is that they are thriving.

… and they are creating this growing body of work, which is community, and family, and housing stability- even to the point where they have created a surplus of energy resource that they can pass it forward (through Bienestar).

I think the archetype of artist is much broader than what fits in the walls of a museum, and right now those are the artists that are inspiring me. So rather than writing music based on a painting, I thought their lives are the art, and they are ongoing and it is ever evolving.

How did you come across these women?

When this lockdown on “illegal” immigrants, whatever that means in a country populated by the descendants of immigrants, happened, I started to get really concerned.

I was like, “okay, I’ve signed a lot of petitions, I’ve made a lot of phone calls- but what do we do locally to let our neighbors know they are not invisible? That we as Americans with papers have their back and we see ‘you’, and we are not going to let you just get ‘disappeared’, or silently taken.” I was wondering, “What do we do as neighbors?”

(Spalding was introduced to the organization through her mother, who has volunteered for Bienestar. Spalding met with the co-directors of the non-profit and offered to help them raise money for a development director).

As a way to raise funds, I went to Frank Gehry’s house and we drew and we composed for an hour, and those sketches are currently being auctioned and all the proceeds will go to Bienestar.

Everything that you said (onstage) seemed like it came from the heart. Do you think of (presenting PAM’s white, upper-class audience with the faces of Latino immigrants at risk under a white-supremacist president) as kind of radical?

I just pretend I don’t know what (PAM’s audience) means, because I figure if someone didn’t do enough due diligence to find out what I’m like as an artist, it’s their problem not mine. They invited me to play, and I told them what I was going to do. This is our performance; this is what I’m inspired by right now.

We tend to think as citizens with papers, “oh those poor people”, and it’s like no, you have that sh** backwards. These women are so badass. They are so hardcore and they are so talented.

What would it take for you to leave your home and your family with nothing? These are individuals with so much courage and they are leaping forth into the unknown, knowing that they are at risk of who-knows-what? And they put down root and they make it work. And they raise these kids and they work together, and volunteer and learn leadership skills and community-building skills. You can’t be a low-income person and not know about working together, it’s very hard, because you have to depend on each other.

At least for a lot of liberal-minded friends I have (who say), “oh we have to help”. No, you just have to get out of the way and pay attention and be present and be supportive.

Support the American dream continuing to unfold, that’s all it is. That mythic dream that you can come with nothing and pull yourself up by the bootstraps and make a better life for your kids. Most of us don’t know what that means anymore because we have been here for a few generations.

The act of making community stability and generational prosperity requires a lot of creativity.

Do you have a framework in mind when you talk about community organizing?

Social engagement can be everything from keeping a green space green and not developing it, to city laws, to state laws, to your national representatives. But as an artist, us artists, us performers, are in a really bizarre situation because for no good reason, people listen to what we say. It makes no sense, but it’s like that.

(Social engagement) feels like the practice of how to actually use that so it’s not just empty air. And also if we do say something or act, it’s grounded, and it’s anchored with mentors who actually have been through the process and can keep us educated, and keep our words moving forward in a way that can be most efficiently harnessed for impact. It’s tricky.

As sincere as I believe Spalding to be when she gives back to the community and praises the women at Bienestar, success as a young artist during the Obama years has left her somewhat detached.

To describe someone whose family is faced with actual threats from the President as an “artist” because of their ability to succeed against all odds in the working class is diminishing at best and patronizing at worst. To refer to her audience at the PAM also as “artists” (which she did at the top of her show) for donating to the high-end art community, when some of them may have voted for President Trump because he threatened those families, is to give them the same pass this audience has always hoped they could buy.

Pulling yourself up “by your bootstraps” is not possible when your government sees your entire identity as a threat, and when America’s aristocracy does not feel the urgency to change that reality. I am not sure Spalding achieved that, despite the images and stories of four women at odds with the President. She has not yet achieved Nina Simone-levels of chastising the feebleness of white liberalism in this country.

We have our first Entertainer-In-Chief, and many entertainers have realized that there is no longer a line between their industry and national politics. Spalding, who is a remarkable artist and who unequivocally deserves all the praise she has received from Hillsboro to Capitol Hill, is still adapting to this paradigm. She is not alone.

But she is engaged, like many of us concerned for the most vulnerable members of our society, and she intends to stay that way.

Esperanza Spalding released her new album, “Exposure“, in September. The album was written, composed and recorded in front of live-stream cameras.