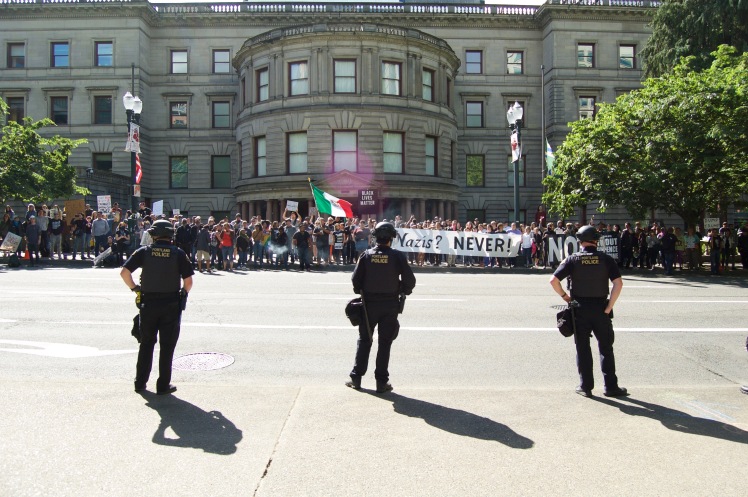 In the middle of one of Portland’s first beautiful Sunday afternoons in 2017, a middle-aged couple crosses downtown’s SW 3rd Avenue holding hands.

“Yeah, get back on your side,” shouts a man dressed in black. He is immediately seconded by someone next to him, and then another, and another. “Are you kidding me? We are one of you guys, we are on this side” says the man in the couple, referring to the Anti-fascists counter-protesters. But it was too late. They are now fascists. But what fascist really means is something no one on either side of 3rd Avenue could agree on.

A lone man in ragged clothes screams at the top of his lungs at a group holding a sign that reads, “Nazis Never” in front of city hall. He is aggressive. He is distraught. Photographers surround him, but it is impossible to make out what he is saying over chants of the anti-fascists. Eventually the chants subside enough to hear the man, on the verge of tears, shout: “You weren’t even listening to me. I’m not a fascist. You aren’t listening.” 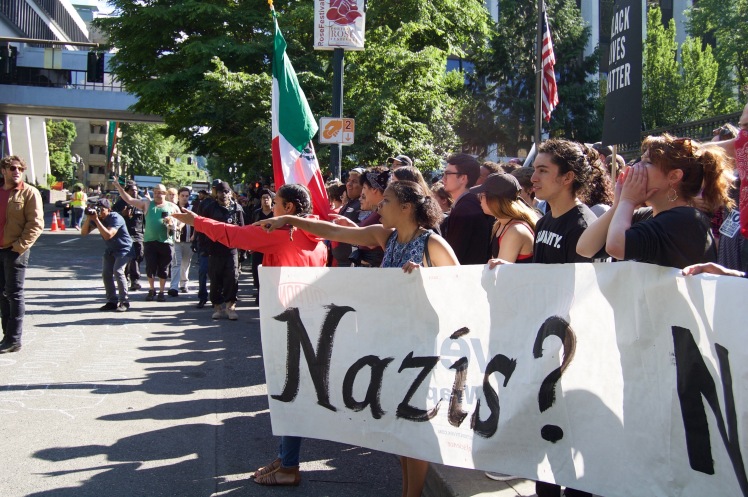 One citizen journalist interviews two fellow pro-Trump protesters about the 45th US President. The conversation sticks to points of agreement. They tell his followers, via live feed, that it was a “White Republican that freed the slaves,” and a “Black Republican who led the civil rights movement of the Sixties.” The message here: I don’t care about racism; I just want to annoy liberals.

This sentiment is particularly grating to a Portlander today.

Portland has a long, horrendous history of racist violence perpetrated on people of color. We know it. Despite all of the progressive policies that helped us reach this preeminent position among US cities, we understand this gruesome scar has not healed. We are still fighting the most stupid, evil institution of racism, many of us actively.

This is why the murder of Ricky John Best and Taliesin Myrddin Namkai Meche by a white supremacist on a Portland streetcar last month shook many Portlanders to the core.

The fact that these two white men died standing between the killer and two teenaged girls of color, one a Muslim, was an upsetting reminder that Portland still has a long way to go. However, that they and a third defender who survived were there, that they stood up and did the right thing, that they confronted a racist with a knife to help two teenage girls- that was inspiring. The five victims of that racist act are the future of the city and we will honor them. The killer is one of the dying elements of our past. Unfortunately, those elements have a friend in the White House.

Walking around either side of SW 3rd Ave requires ducking under selfie sticks while overhearing twitter handles and insults hurled across the street.

Most of these insults are directed at the signage, weight, hairstyle, and outfits of the opposition.

A circle of pro-Trump and Antifa protesters manage to stay calm enough to get a conversation going amidst the political zeitgeist that had taken over two blocks in the otherwise empty downtown. Although the debaters seem to value civil discourse, it is hard to overlook the stab-vests, helmets and balaclavas that members of both parties chose to wear to a protest in front of City Hall. 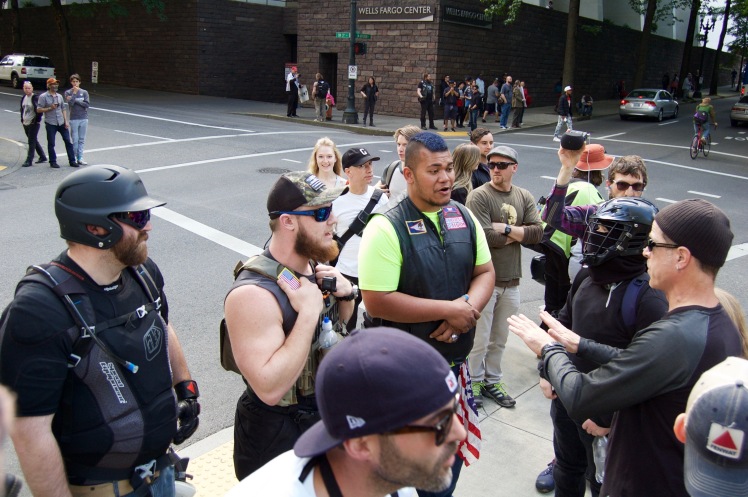 Not Politics, nor philosophy, nor religion- no distinct set of ideas seem to unite the Trump supporters beyond aggravating a grieving community. Yet contradictions are abound on both sides.

I’m sure that the folks carrying signs that read “fuck the alt right” or “little bitch” with an arrow pointing to a clansman wish for more civil discourse; I can’t imagine that the numerous Trump supporters sporting cannabis-adorned stickers and flags would appreciate the drug policies pushed by Jeff Sessions. 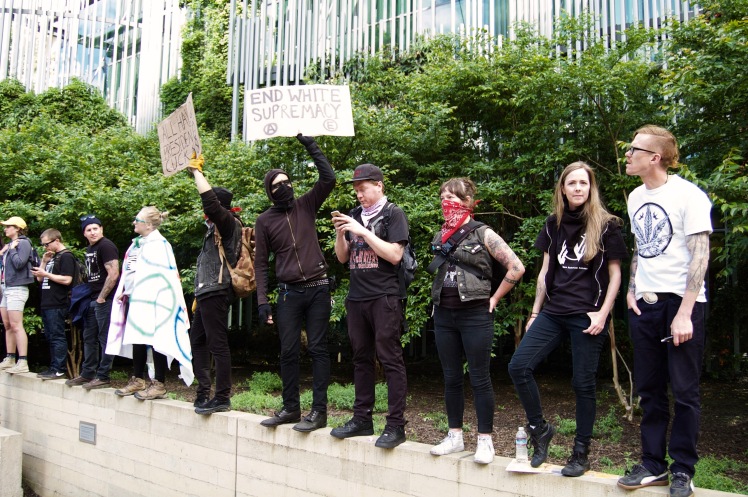 One teenaged Trump supporter holds up a fidget spinner in one hand and a tampon in the other. “We need to make America fidget spinner again”, he told me. The tampon was chucked at him from the other side and promptly appropriated into the bit.

While the Portland Police had discharged a teargas grenade earlier in the afternoon, I witness only one physical altercation.

On a side street a few hundred feet from the masses, an Antifa in all black and Trump supporter wearing a gas mask throw punches at one another. The Antifa is older, maybe 23, while his opponent is at most 18. A third party breaks up the fight and the younger man limps onto the sidewalk, stifling his tears, to pick up his “Make America Great” sign.

Violence is kept to a minimum, but many participants in both camps came dressed for a brawl. While military gear is much more prevalent on the Trump side, the baseball, lacrosse, equestrian and bike helmets, the ski masks, goggles, bandanas and face paint indicate that both sides anticipate a bloody, brutal, intense street fight that would result in caved-in skulls and severed limbs.

People of color are present on both sides. So are women, young teens, and the elderly. Medal-wearing veterans of Vietnam and the endless wars in the Middle East showed up for each camp. Supporters of weed legalization and free speech are legion.

I don’t see any Nazis. I see a lot of kids who have probably had plenty of conversations with their concerned high school principal. I see a lot of shit-eating grins hiding a deep depression. I see a lot of kids who stood against the wall at school dances, who never managed to connect. I see plenty of empty-headed trolls who decided to spend this beautiful Sunday blasting pure, visceral hate at strangers just for the joy of it. While it is clear that the pro-Trump rally has this identity in its DNA, I see these people on both sides.

Above all the noise, the failed attempts at dialogue, the misappropriated symbols and agitprops, the whines of dogs who would prefer a Sunday walk on Mount Tabor, one thing stood out: the dwindling space between the safe spaces.

Cops dressed to invade Ukraine, to seize Aleppo, keep 3rd and 4th Avenue clear of agitators, but still the agitators pressed at its edges. What used to be the distance between Zucotti Park and the Tea Party rallies on the Washington Mall has now shrunk to thirty feet. As the afternoon wore on, braver souls on either side entered this barely-there no-mans-land to more effectively hurl abuses, to howl their grievances, to bare their teeth. 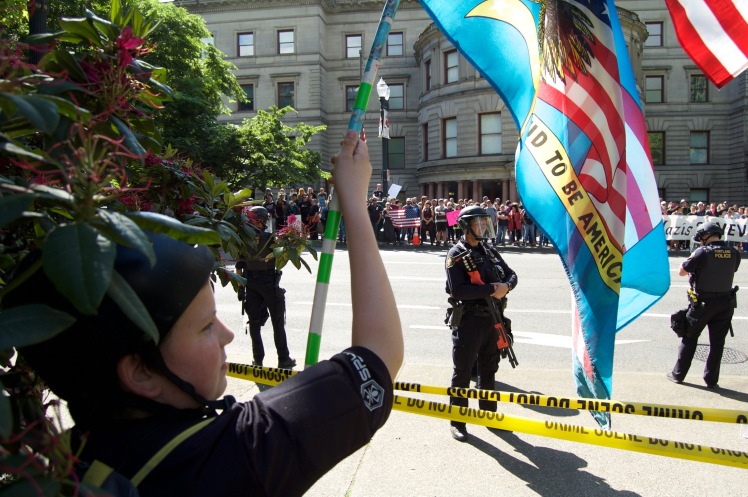 While military get-up, petty insults, threats, and bizarre misinformation have been mainstays at rightwing events since the Tea Party movement began (especially at President Trump’s rallies), Portland’s pro-Trump/anti-Trump rally should concern liberals of every persuasion.

If much of Trump’s and the GOP’s most perverse supporters are a result of the Fox/Breitbart era media landscape, if the only difference between the two news universes is an absence of trolls learning how to profit off of liberals, what infected the right in this country will continue bleeding into the left.

This cannot be allowed to happen.

The incivility of the Trump administration is horrendous, but the real threats it poses are to religious and civil liberties, to the working class, to the sick and the poor, to the innocents at risk of another unnecessary war started by a Republican president, to the fate of the entire planet as we face down the industries who are knowingly destroying our environment.

Trump and his trolling supporters are unique for being both cartoonish-ly crass and villainous. This makes it near impossible for their center-right allies to defend them without looking like hypocritical cowards. But if the left gives in to the same forces that consumed the right, it will end up producing its own indefensible president. And then the worst of the worst will have their deadly street brawl.

Above the signs on the counter-protest side reading “love all”, “black lives matter” and “united against hate”, one Antifa protester stands on a ledge at the back of the crowd to make sure the fans of No. 45 can read his: “All Hail President Cuck”.